Colonies of honey bees include three distinct types of individual organisms: the Drones, the Workers, and the Queen. 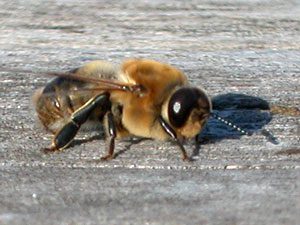 The drone honey bees represent the males in the colony as they are reproductively active and produce the sperm used to fertilize the Queen’s eggs. However, they are unique in that they contain half the chromosomes (haploid) of the females and are developed forms of unfertilized female eggs. This literally means they have no fathers. The unfertilized eggs are laid in the larger horizontal cells called “drone comb”. After 24 days (on average), the adult drone emerges with the most robust body of the three types and large eyes that meet on top of their head (dorsally). The primary and singular function of drones for the colony is to mate. Successful mating results in death, making these males entirely monogamous. On average, drones live for 20 days and are specifically produced by the colony on during specific times of the year when mating is happening (typically in spring). 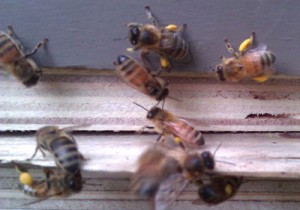 The worker honey bees are sterile females (99% true) that perform the great majority of the work for the colony. As females, they develop from fertilized eggs that are laid in standard horizontal cells (general comb). After 21 days (on average), the adult Worker emerges and progresses through a series of jobs, switching as she ages. Generally, she takes care of the brood and other individuals first, then the maintenance of the colony, and finally is allowed to leave the colony for defense and foraging. Workers make up the majority of a honey bee colony. The lifespan for workers varies on the amount of work they do, based upon the wear and tear they put on their bodies. On average, the lifespan for workers is as follows: summer = 15-38 days, spring/fall = 30-60 days, winter = 100-140 days. 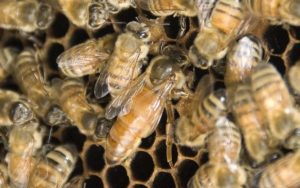 The queen honey bee is the single egg laying female in the colony (99% true). As females, they develop from fertilized eggs that are laid in vertical cells (Queen’s cup). After 16 days (on average), the adult queen emerges with an elongated abdomen that will soon be ready to mass produce eggs. As a virgin queen, she takes off on her mating flight, mates with multiple males (polyandrous) and returns to lay eggs for the majority of her life, until the colony swarms.

Reproduction in honey bees can be thought of at various levels of biological organization including the individual organism and the superorganism colony. For the individual organism, each type of honey bee (drone, worker, and queen) starts off as an unfertilized egg. If the egg is not fertilized, it develops into a drone (haploid). The drones fly out during the mating season to mate with queens flying their mating flights. When the egg is fertilized, it may develop into either a worker or a queen. Two important factors determine which development will occur, nutrition and the queen’s pheromone. Once the larvae emerges from the egg, if it is fed relatively low nutrient food (brood food) and is exposed to the queen’s pheromone, it develops into a worker. If the larvae is fed high nutrient food (royal jelly) and is not exposed to the queen’s pheromone, it develops into a queen.

Why do honey bees swarm?

As humans individuals are trillions of cells working together, so too are the honey bee individuals. However, the honey bees have another more complex level of organization called the superorganism or colony. Thus, the many individuals work together as parts of the superorganism that reproduces by swarming. When a colony swarms, the old queen takes many workers of various ages and leaves the old nest to found a new nest. The remaining workers will have already prepared new virgin queens to emerge within a few days of the queen leaving. Thus, the young queens inherit the efforts of their previous queen. Thus, a single colony can become two colonies, similar to a single cell dividing to become two cells.